Approximately. When you measure the release of dopamine that food, sex and drugs cause you can roughly quantify the amount of pleasure each delivers.

Via Frontline, slides by Richard Rawson:

Methamphetamine effects the centers of the brain that control judgment, control reward, and control memory. The most important one probably are the reward centers of the brain. When, when that part of the brain is stimulated dopamine’s released, and you experience that as pleasure. Under normal circumstances those responses occur for naturally occurring rewarding events.

Similarly if you put a rat, a male rate in a box and you give him access to a receptive female, and you allow them to have sex, at the point where they experience orgasm you get a huge release of dopamine. You see an increase of about 200 units. This rush is what feels good and what is experienced is pleasure. And this slide of course illustrates the principle that one orgasm equals two cheeseburgers.

Now drugs of abuse release dopamine. Alcohol, for example, produced a release of dopamine from about 100 units to about 200, You get a similar magnitude of an effect with nicotine. Cocaine produces a huge release of dopamine, from 100 units to about 350 units, however the mother of them all is methamphetamine. Methamphetamine you get a release from the base level to about 1250 units. A tremendous increase of dopamine. This produces an extreme peak of euphoria that people describe as something like they’ve never experienced and they probably never have experienced before because the brain really isn’t made to do this. And that’s why people will be attracted to it and want to take it over and over and over again. They want to produce that response. 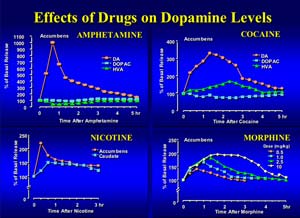