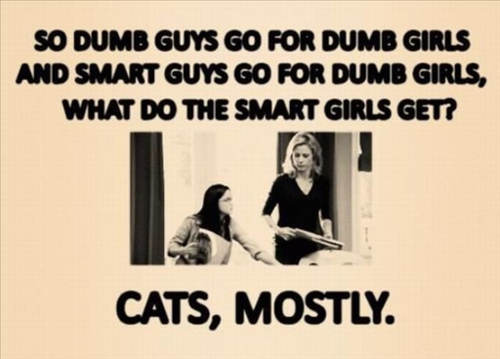 The always interesting Jesse Bering breaks down a new study over at Slate:

Ask a straight man, “How do you like your women?” and it’s unlikely he’ll answer, “Dumb and sleepy.” But according to new findings, these characteristics—and any other traits suggesting that the lady isn’t particularly alert—are precisely what the human male has evolved to look for in a one-night-stand.

On the other hand, the more psychological and contextual cues—pictures of dimwitted- or immature-seeming women, for example, or of women who looked sleepy or intoxicated, did seem to have an effect: Not surprisingly, men rated them as being easy to bed. But more importantly, they were also perceived as being more physically attractive than female peers who seemed more lucid or quick-witted. This perceived attractiveness effect flipped completely when the participants were asked to judge these women as potential long-term partners. In other words, the woozy ladies were seen as sexy and desirable—but only for fleeting venereal meetings. They lost their luster entirely when the men were asked to rate these same women’s attractiveness as prospective girlfriends or wives.

The main finding to emerge from this follow-up study was that the more promiscuity-minded men who happened also to have deficiencies in personal empathy and warmth were the ones most vigilant and responsive to female “exploitability” cues. Men without this critical calculus—say, a disagreeable man who prefers monogamy, or a caring one who likes to play the field—are more likely to have these cues fly right past their heads and miss the opportunity to capitalize on an “easy lay.” So rather than the sexual exploitability hypothesis summing up the male brain as one big ball of undifferentiated stereotype, the caveat here is that there are multiple subtypes of reproductive strategies in men. Not all men are pricks, in other words.