What’s the best way to study? 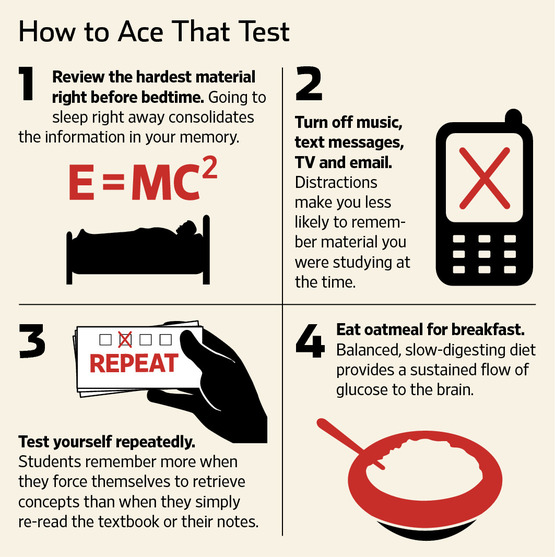 The WSJ has an excellent piece summing up the latest research on the best way to study. Some highlights:

Chiefly, testing yourself repeatedly before an exam teaches the brain to retrieve and apply knowledge from memory. The method is more effective than re-reading a textbook, says Jeffrey Karpicke, an assistant professor of psychological sciences at Purdue University. If you are facing a test on the digestive system, he says, practice explaining how it works from start to finish, rather than studying a list of its parts.

Sleep also plays a role in test performance, but in two unexpected ways. Review the toughest material right before going to bed the night before the test. That approach makes it easier to recall the material later, says Dan Taylor, director of a sleep-and-health-research lab at the University of North Texas in Denton. And don’t wake up earlier than usual to study; this could interfere with the rapid-eye-movement sleep that aids memory, he says.

Everybody knows you should eat breakfast the day of a big test. High-carb, high-fiber, slow-digesting foods like oatmeal are best, research shows. But what you eat a week in advance matters, too. When 16 college students were tested on attention and thinking speed, then fed a five-day high-fat, low-carb diet heavy on meat, eggs, cheese and cream and tested again, their performance declined.

While many teens insist they study better while listening to music or texting their friends, research shows the opposite: Information reviewed amid distractions is less likely to be recalled later, says Nicole Dudukovic, assistant professor of psychology at Trinity College, Hartford, Conn.

If you are still feeling anxious, set aside 10 minutes beforehand to write down your worries, says Dr. Beilock, an associate professor of psychology at the University of Chicago. She and a fellow researcher tested 106 ninth-graders for anxiety before their first high-pressure exam, then asked half of them to spend 10 minutes writing down their thoughts right before the test. The anxious kids who did the writing exercise performed as well on the test as the students who had been calm all along. But anxious students who didn’t do the writing performed more poorly. Expressing one’s worries in writing, Dr. Beilock says, unburdens the brain.