He studies the brains of killers. And realized his own family has the same qualities:

Jim Fallon recently made a disquieting discovery: A member of his family has some of the biological traits of a psychopathic killer.

“These results will cause some problems at the next family party,” he said, reviewing the data on his laptop in his backyard. Meanwhile, his wife, Diane, stood in the kitchen, using a knife to slice through a blood-red pepper.

Dr. Fallon, 62 years old, is a neuroscientist who studies the biological basis of human behavior at the University of California’s campus here. He has analyzed the brains of more than 70 murderers on behalf of psychiatric clinics or criminal defense lawyers. It’s a young science. Because jailed killers rarely are permitted to take part in research trials, data linking genes and brain damage to violent crime are tentative and often disputed.

“In terms of early factors, we know nothing about who becomes an adult psychopath,” says Adrian Raine of the University of Pennsylvania, who applies neuroscience techniques to study the causes and cures of crime.

Three years ago, as part of a personal project to assess his family’s risk of developing Alzheimer’s disease, Dr. Fallon collected brain scans and DNA samples from himself and seven relatives. At a barbecue soon thereafter, Dr. Fallon’s mother casually mentioned something he had been unaware of: His late father’s lineage was drenched in blood. 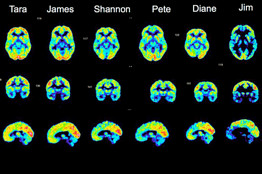 PET scans show activity in the brains of Dr. Fallon and various relatives. The large black areas in the scans of Dr. Fallon’s brain, labeled “Jim” at far right, indicate very low level of brain activity, called “orbital hypofrontality” in this area. The pattern is simillar to the pattern Dr. Fallon observed in murderers, and also consistent with people who do not engage emotionally, whether by seeming cold-hearted or by seeming unserious in a happy-go-lucky sense, Dr. Fallon says.