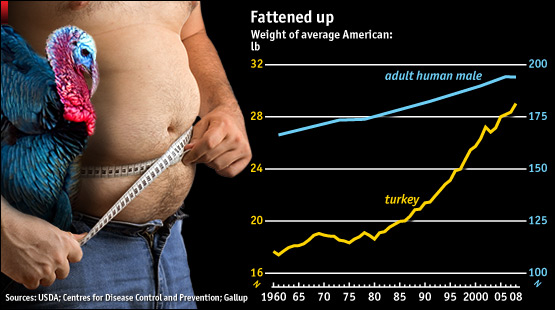 One thing Americans should be thankful for this Thanksgiving is that they have not put on as much weight as the average turkey. Between 1960 and 2008, turkeys bulked up by around 11lb (5kg) to 29lb, an increase of 64%, according to the United States Department of Agriculture. Coincidentally, in that same period the average American man gained 28lb, almost the equivalent of a turkey, according to data from the Centres for Disease Control and Prevention, another government agency, and a Gallup poll of 2008. This year an estimated 250m turkeys will be raised, 8% fewer than a year ago, but still almost enough for one bird each for America’s 308m people.