The creators of a program aimed at counteracting Iran’s Internet filters have issued a call for something that lies around unused on plenty of desks: USB thumb drives. 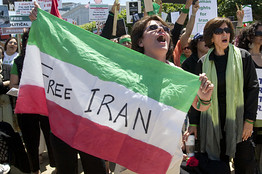 Bahare Shabani, left, from Houston, takes part in a rally against the Iranian government July 25, 2009, in San Francisco.

The program, called Haystack, allows Iranian citizens to access the Internet without the impediments on Facebook and other sites that the government has imposed. It also masks the user’s identity online, a crucial safety measure amid efforts by pro-regime Internet users to track down protesters.

Developed by two software developers, Austin Heap and Daniel Colascione, Haystack was inspired by Freegate, the anti-censorship software used in China to evade its filters. Mr. Heap, in particular, has been closely involved in online efforts with Iranian protesters, organizing proxy assistance and sharing information via Twitter.

Now Haystack is seeking thumb drives, which can be used to spread the software from within the country. “Distribution will largely be a person-to-person effort, and we all know USB keys are nice and tiny. I get the tiny 128mb versions all the time at tech conferences, and now I’ve learned they’re actually useful,” Mr. Heap blogged.

He’s requested that volunteers send them to his post-office-box address, listed on Haystack’s donations page.